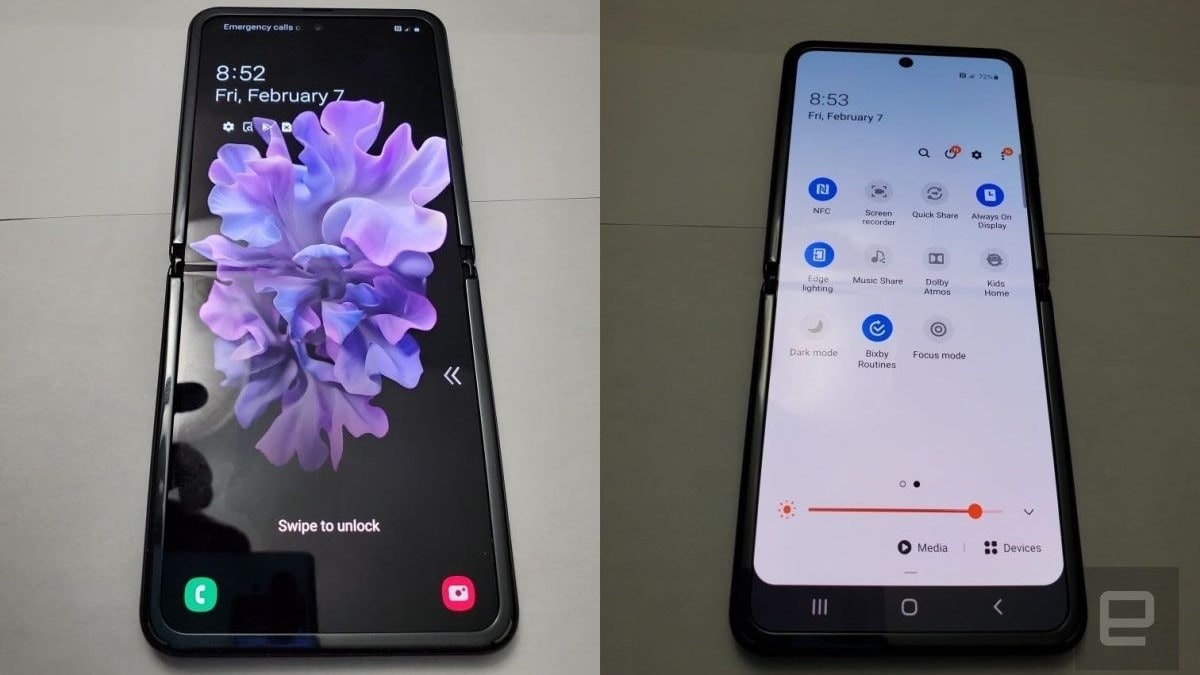 Samsung Galaxy S20 series and Galaxy Z Flip phones – set to launch on Tuesday – have appeared in a set of fresh leaks. After making their way out in a tonne of renders, live images, and getting their price as well as specifications unceremoniously appear online, more details have now surfaced. Alleged live images of the Galaxy Z Flip foldable phone have been leaked again, alongside what appears to be an official poster for the Galaxy S20 Ultra 5G. Also, more details about the specifications, retail package contents, and features of the Galaxy S20 and Galaxy S20 Ultra have leaked as well.

Let’s start with the Galaxy Z Flip. Live images of Samsung’s upcoming foldable phone, which come courtesy of Engadget, show a familiar tall display with the Infinity-O design. Additionally, a tweet by tipster Ishan Agarwal mentions that the Galaxy Z Flip will come with a cover in the retail package. The accompanying images, which appear to be product manual screenshots, mention an optimised UI for the Galaxy Z Flip and again confirm the presence of an ultra-thin glass over the foldable panel. There is also the mention of its specifications that include Snapdragon 855+ SoC, 8GB RAM, 256GB storage, 6.7-inch full-HD+ Super AMOLED display, and a 3,300mAh battery.

Moreover, the tipster has also shared what he claims to be an official poster for the Galaxy S20 Ultra 5G. In a separate tweet, he mentions that the Galaxy S20 Ultra will come with a host of new features such as 100x Space Zoom, Single Take, and Bright Night. Another leaked slide mention specifications of the phone that include a 6.9-inch WQHD+ (1440 x 32000 pixels) Super AMOLED display, up to 16GB of RAM, 512GB storage, and Snapdragon 865 SoC. The Galaxy S20’s retail package is said to include an AKG-tuned USB Type-C headset and a 25W charger.