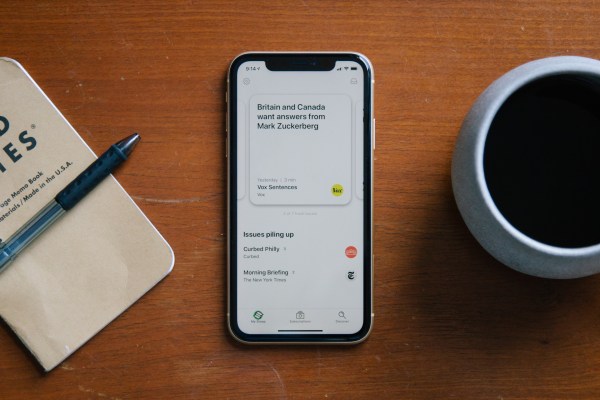 Stoop is looking to provide readers with what CEO Tim Raybould described as “a healthier information diet.”

To do that, it’s launched an iOS and Android app where you can browse through different newsletters based on category, and when you find one you like, it will direct you to the standard subscription page. If you provide your Stoop email address, you’ll then be able to read all your favorite newsletters in the app.

“The easiest way to describe it is: It’s like a podcast app but for newsletters,” Raybould said. “It’s a big directory of newsletters, and then there’s the side where you can consume them.”

Why newsletters? Well, he argued that they’re one of the key ways for publishers to develop a direct relationship with their audience. Podcasts are another, but he said newsletters are “an order of magnitude more important” because you can convey more information with the written word and there are lower production costs.

That direct relationship is obviously an important one for publishers, particularly as Facebook’s shifting priorities have made it clear that publications need to “establish the right relationship to readers, as opposed to renting someone else’s audience.” But Raybould said it’s better for readers too, because you’ll be spending your time on journalism that’s designed to provide value to the reader, not just attracting clicks: “You will find you use the newsfeed less and consume more of your content directly from the source.”

“Most content [currently] is distributed through a third party and that software is choosing what to surface next not based on the quality of the content, but based on what’s going to keep people scrolling,” he added. “Trusting an algorithm with what you’re going to read next is like trusting a nutritionist who’s incentivized based on how many chips you eat.”

So Raybould is a fan of newsletters, but he said the current system is pretty cumbersome. There’s no one place where you can find new newsletters to read, and you may also hesitate to subscribe to another one because it “crowds out your personal inbox.” So Stoop is designed to reduce the friction, making it easy to subscribe to and read as many newsletters as your heart desires.

Raybould said the team has already curated a directory of around 650 newsletters (including TechCrunch’s own Daily Crunch) and the list continues to grow. Additional features include a “shuffle” option to discover new newsletters, plus the ability to share a newsletter with other Stoop users, or to forward it to your personal address where they can be sent along to whoever you like.

The Stoop app is free, with Raybould hoping to eventually add a premium plan for features like full newsletter archives. He’s also hoping to collaborate with publishers — initially, most publishers will probably treat Stoop readers as just another set of subscribers, but Raybould said they could get access to additional analytics and also make subscriptions easier by integrating with the app’s instant subscribe option.

And the company’s ambitions even go beyond newsletters. Raybould said Stoop is the first consumer product from a team with a larger mission to help publishers. They’re also working on OpenBundle, an initiative around bundled news subscriptions with a planned launch in 2019 or 2020.

“The overaching thing that is the same is the OpenBundle thesis and the Stoop thesis,” he said. “Getting publishers back in the role of delivering content directly to the audience is the antidote to the newsfeed.”

Facebook CEO Mark Zuckerberg Calls for New-Style Regulator for EU
What Is Bitcoin, How Is it Worth So Much, and How Can You Spend It?
iQoo 3 Promo Page Goes Live on Flipkart Ahead of February 25 Launch in India
‘Face ID-Compatible’ Custom Face Masks Could Protect You From Coronavirus and Still Unlock Your iPhone
Vodafone Idea Says It Will Pay AGR Dues, Continuation of Business Depends on Supreme Court Order